In typical, well-timed fashion, Earth Day 2021 coincided with an announcement from Tesla about their intention to power all Supercharger stations with renewable energy this year.

It’s not really headline news to state that in order for a positive effect on the environment to be felt, the electric vehicle revolution needs to be powered by renewable energy. However, Tesla’s solar and energy storage business, and the impact it should have, is at least worthy of a few column inches.

The vast majority of EV charging happens at home and the fact that the many owners have some form of domestic solar energy infrastructure means that their vehicles are literally driving on sunlight. But, to keep their end of the bargain, the manufacturers of charging stations also need to ensure that their respective (and numerous) installations and facilities are powered by renewable energy too. And by the end of 2021, the biggest name in the EV industry will meet its moral obligation by doing just that.

Tesla does already have a degree of solar power at some of its Supercharger stations. Still, for the most part, its charging channels are powered by the grid and from the electric resources of the locale in which they’re situated.

Justin Lange, Tesla’s market lead for Superchargers in the mid-Atlantic, posted some statistics about Tesla’s Supercharger system and the company’s progress. He stated the following milestones: 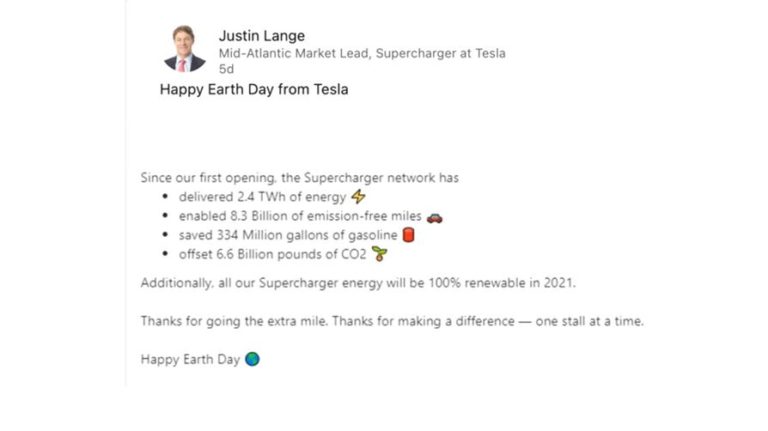 Keep in mind; Tesla also has its own solar business already, so this plan won’t really be something new for the automaker. Even if competing brands decided to roll out a massive network of public fast-chargers over a short period of time, there’s a pretty strong chance they’re not planning to make them all run on solar energy.

Tesla’s Supercharger network is arguably one of its top advantages over other brands producing electric cars. While most other automakers count on third-party public charging options, Tesla is constantly improving and expanding its fast and reliable Supercharger network.

They currently run the most significant global electric vehicle network, consisting of over 24,000 superchargers in over 2,700 locations worldwide. This new initiative is ambitious, but it could substantially contribute to the fight against climate change if it’s successful.

It’s unclear at the minute what exact approach Tesla will be taking to achieve this goal. However, by the sounds of their current solar structure and bold statements, Tesla has got this covered.

Boasting impressive speed, acceleration and range, Tesla is supported by the best national charging network available, making it the obvious choice in the EV world.