In late 2020, the UK government provided an update on the growth of the electric vehicle charging infrastructure.

A total of 4,270 new charging points were added to the network in 2020, passing the 20,000 mark of publicly accessible devices. Of this number, around 4,000 are judged to be ‘rapid’ charging devices.

But, given the demand and the ever growing number of electric vehicles now on the UK’s roads, experts have responded to the latest data claiming that the infrastructure isn’t growing fast enough.

Zap-Map, the UK’s leading electric vehicle mapping service, have produced their annual survey on plug-in points across the country. The much-anticipated league table ranks the UK’s most popular EV charging networks based on data from its annual survey of Zap-Map’s community of EV drivers.

The results are based on the opinions of around 1,500 plug-in vehicle owners who have had first-hand experience of using different suppliers. This survey looks at the overall satisfaction in the following four areas for its users:

So what did these drivers have to say….? (Take a look at the league table below)

Ranked number 1, and retaining their top position from 2019, was the Tesla network with a 4.8 star rating, making it the most appreciated charger network amongst surveyed drivers.

Coming in a close second is Instavolt who, like Tesla, retain their ranking position for another year. Undoubtedly, part of Instavolt’s appeal is their ability to offer multi brand charging to its users.

Osprey (formally known as Engenie) came in third, with a more than respectable ranking score of 4.1 stars. As you can see, Osprey are the biggest ‘upward movers’ on the table, climbing a notable 5 places from last year.

As you can also see from some of the downward movements, the surveyed drivers (and no doubt the wider EV owning community) are a demanding bunch, and so they should be. With more players in this space and a subsequent greater choice, the public will absolutely vote with their feet. If any of them have aspirations to challenge Tesla’s dominance, or even feature on Zap-Map’s annual review table, it’s clear that they will have to bring something of note to the table.

What are your thoughts? If you own an EV, what are your views on the UK’s charging infrastructure?

If you own an EV, or are considering an EV as your next car, get in touch with Novo to discuss your insurance arrangements. 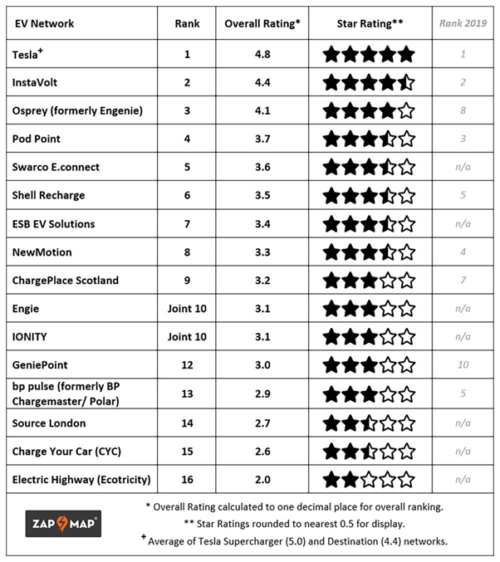 Genuine insurance to protect now and in the future. For businesses of all sizes and styles.

Scintillating cover that reacts to your way of life. For all types of homes and lifestyles.